The Loop of Carnage & Cascading Effect on the Global Equity Market

The Selloff Triggers in CY-2022

Geopolitical Unrest: The all-out conflict in the Eastern Ukraine with Russia has triggered panic among investors. This has led to aggressive selling in the equity segment for an extended period. The Russian index was down over -40% on 24 February 2022. Similar event happened in March 2014, when Russia took over Crimea. During that period, the Russian index RTSI lost over -53% in 9 months. Nevertheless, the market recovered while Indian equity market stood unhampered. 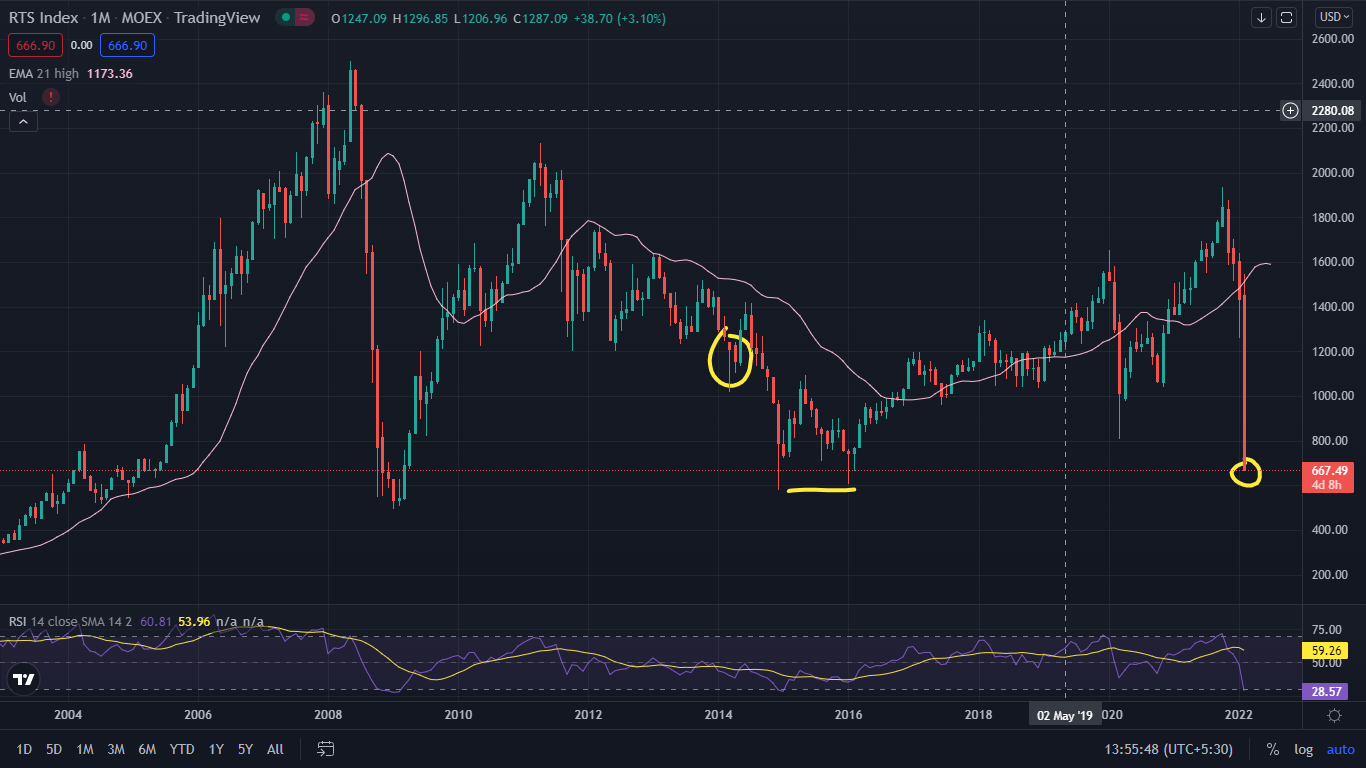 Crude Oil Price & Rising Inflation:  The Crude oil price crossed the $ 100 mark today (24th Feb) as the conflict escalated to a new height. The last price of over $ 100 levels was seen in September 2014. After that, it started to decline consistently till January 2016, marking a low of $ 27 per barrel. The impact of energy price is felt across the global with raw material price becoming dearer. In fact, the surge in raw material price had put pressure to company’s operating margin, and which is factored to an extend by the market. The stability will resume as the energy price starts to cool-off through a measured price tackle from the oil producing nations. 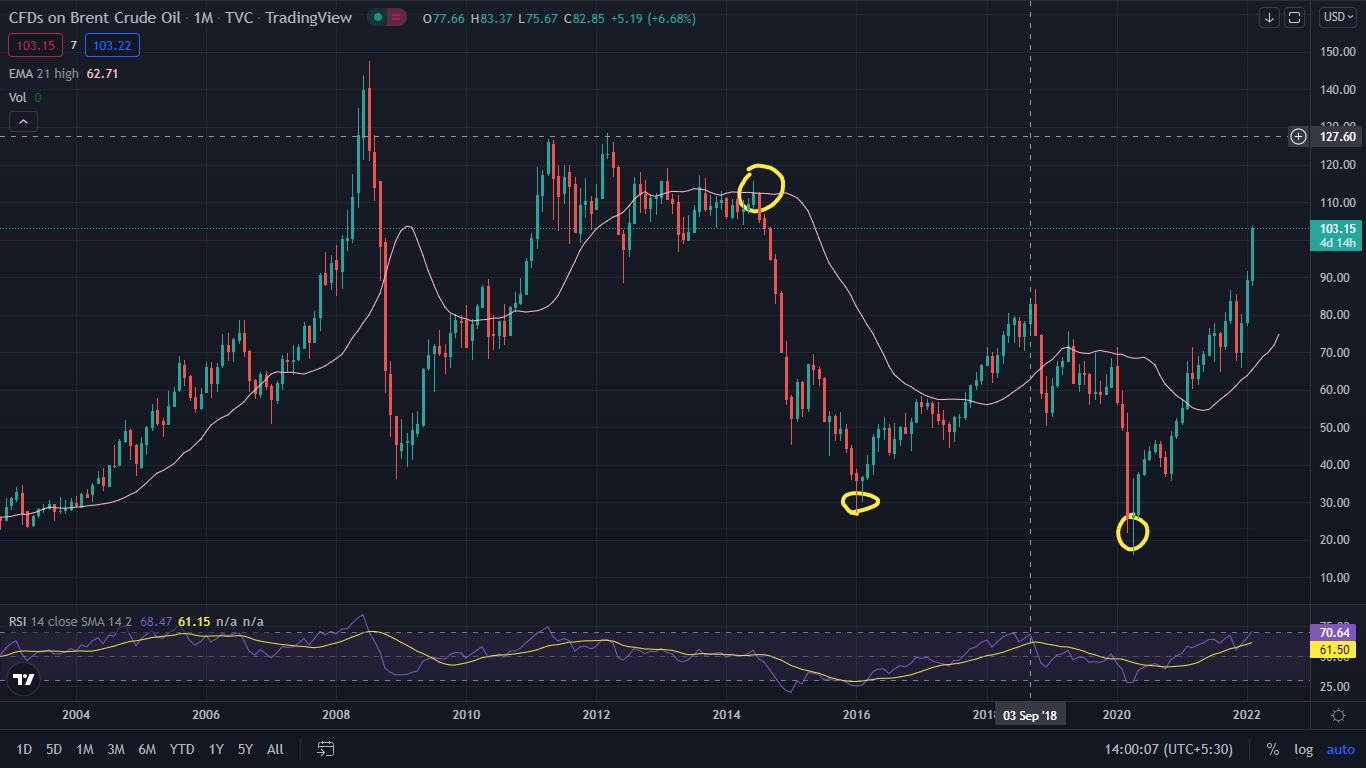 Shift in US Fed’s Policy:  The year 2020-2021 was largely driven by cheap money and abundant liquidity in the global economy. The strategy to support the growth meant lowering the key interest rate to near zero levels. Now, the drastic shift in monetary policy from central bank to hike the rate aggressively has kept investors on risk-off mode. Again, from a past experience of 2013 during the ‘Taper Tantrum’, the impact on market was short-lived. The current policy impact will also be limited for a certain period as the market adjusts to this new policy regime.

Conclusion:  It is likely that the equity market will remain negative to sideways in the next 2-3 months until the geopolitical and monetary policy are factored by the market. However, the market reaction/turmoil will be a temporary phase where smart money will hunt for a good bargain to build long-term portfolio. Therefore, it is imperative for retail investors to keep away with emotions due to ad-hoc events, and focus on long-term growth opportunity coming from the fearful market.

Popular Posts
Make Mutual Fund investment work for you with Algrow.
30 September 2022
How to Use Artificial Intelligence to invest in a multi-asset portfolio?
27 October 2022
Recent Posts
How to Use Artificial Intelligence to invest in a multi-asset portfolio?
27 October 2022
Make Mutual Fund investment work for you with Algrow.
30 September 2022
Naari, Janani, Women - A Better Investor!
09 March 2022
Popular Tags
KNOW MORE ABOUT 5NANCE
What is financial planning? How is 5nance.com better?
Financial planning is a process that provides you with (a) A scientific way to manage your finances. It helps individuals make calculated provisions to align their future goals and requirements. and (b) a personal goal plan that enables users to realize objectives for their future. 5nance makes use of an innovative financial planning software to analyze your existing portfolio and set up plans to meet those objectives. We offer financial planning tools and services like budgeting, investment planning, insurance planning, cash management, retirement planning and real estate planning.
Who is a financial planner? How can 5nance.com help you plan better?
A financial planner is an expert who advises users to manage money in a methodical manner. Our personal finance software plays the role of a budget planner and helps users plan their goals and make goal based investments.. Our integrated financial accounting software helps users identify their financial requirements, present priorities, future needs and products that are most suitable to meet their needs. We provide tools that allow our users to create monthly investment plans, track spending patterns and optimize savings.
How does 5nance.com create an individual’s personal financial plan?
As a personal budget software, we take care of user’s money management needs such as budgeting, expenses tracking and savings optimization. You can expect comprehensive financial planning and best investment recommendations from our investor friendly portal. We provide real time portfolio tracking and put out timely alerts and research calls to optimize returns on their investments. Online automated advisory and services offered by us is absolutely free of cost. Users can make investment through our portal without incurring any expenditure.
How is 5nance platform different from others?
Like a personal budgeting software, 5nance.com offers a platform that enables users to go for budgeting, planning, advisory, portfolio tracking and investments in just few clicks. We allow users to link their bank accounts with our portal to facilitate ease of operation. Users can execute financial transactions and get prudent advisory at zero cost.
All rights reserved. Reproduction of any content in any form, including but not limited to articles, tips, photos, videos, designs, graphs or any form of representations, in whole or in part, in any form or any medium without explicit written consent of Innovage Fintech Private Limited is prohibited.

Innovage Fintech Private Limited is registered with Association of Mutual Funds in India (AMFI) as a mutual fund distributor having ARN no. 87155 and is also holding a valid Corporate Agent (CA) registration with Insurance Regulatory and Development Authority of India (IRDAI) registration no. CA0339. Any recommendation provided by Innovage Fintech Private Limited to the customers on mutual funds is incidental to its primary activity. For products other than mutual fund, no recommendation is provided in any form by Innovage Fintech Private Limited.
Advisory Services on 5nance.com is provided by Innovage Investment Advisers Private Limited, a SEBI registered Investment Adviser having registration no. INA 000003809 (Valid from 13th Nov 2015 - Perpetual).
;
* Mutual Fund investments are subject to market risks, read all scheme related documents carefully before investing.
* Insurance is the subject matter of solicitation.

Thank you for your comment. It is submitted for a review. We'll be uploading it soon.
Ok
Call Me Back X
Have you planned your tax yet? Try tax-max.
It’s Free, Start Now!
Give little, Get More
Invite your friends and share your referral code - .
Both of you win shopping vouchers when your friend completes his/her first transaction
You’re Inviting
I know Email ID
VIEW TERMS AND CONDITIONS
Pick your insurance to buy
Motor
Insurance
Health
Insurance
Term
Insurance

Link your Aadhaar number for following Investor's Account. Failure to do so woud result in your account becoming non operational